Looks like Ancestry is rolling out a new feature. (Thanks to Rene for the image.) 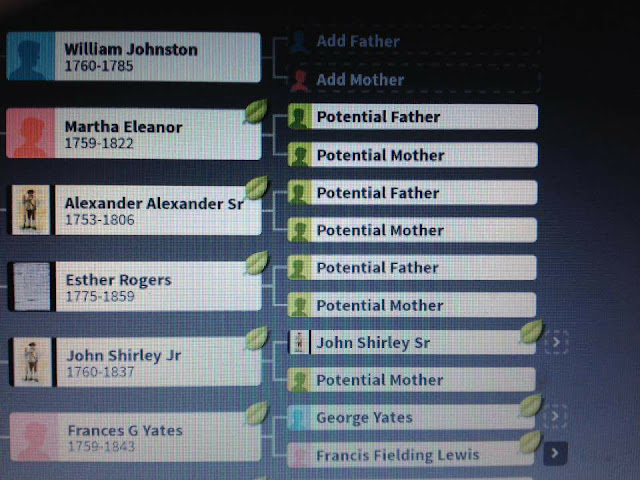 Ancestry wants to let users know about possible connections with other users' trees. I'm sure that will work out well. *head/desk*
It's clear that Ancestry's priority is numbers, not content and definitely not accuracy. Numbers of profiles, numbers of trees. It makes no difference to them if the profiles/trees are total junk.
If they cared about accuracy they could make new users watch a short video like this one:

...before starting a tree. Or maybe a pop-up disclaimer: "Information on trees has not be validated. Respect your ancestors by researching to find out who they really are. If you instead choose to copy other trees be prepared to be mocked when you announce to other genealogists that you have your tree back to Adam & Eve or that you got back to royalty in a matter of hours." Okay, maybe something nicer.
Instead they insist on making it easier for people like these to create trees:


✿ I've gotten back to 17th century on mom's side; finally found Scottish connection on dad's side....then my free 2 wks Ancestry.com ran out. LOL. i have the names; now want some stories.
✿ Any word on how long until the search function for those born before 1000 A.D. is going to be fixed? I've got a LOT of family from way before then, and I can't get anything but some stray German school book information .... I've talked to customer service, who sent a report to the tech folks. Slowing me down !!
✿ Dear Ancestry.com; I don't want to know my real past, I think it is about time your site offered replacement histories after all America is the land of dreams
✿ I just spent 7 hours on Ancestry.com tracing my lineage to my 54th great-grandfather Fiacha Tolgrach MacMuireadhach, High King of Ireland, who was born in approximately 850 BC. Yes. That really happened.
✿ I'm so excited to be on here!!! Started my family history couple of months and wow!!! It has been a blast! I have one line of my husbands family back to adam and eve!
✿ According to my latest research on ancestry.com and other sites,
Adam and Eve are my 104th great-grandparents!

This new feature is slowly being rolled out. I'm hoping that those of us who have turned off tree hints won't be subjected to it.

Here's the third unhinged tree from this Ancestry user.


That's the entire tree. A tree of the evolutionary relationship of all animals would be interesting. This, however, is a jumbled mess.

The tree owner is the same as last week's post but this is from another tree. At the top of the tree is "Father of Darkness." His children and grandchildren (and I use those terms loosely) are as follows:

Here's a snippet of the tree's "list of all people": 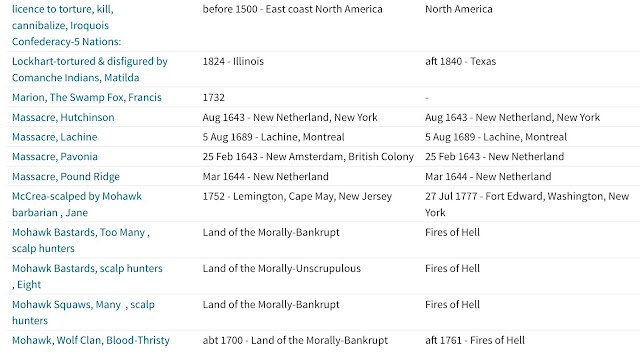 I think the relationship of these events only exists in the tree owner's head.

There is not enough snark to describe this person's trees. The tree owner is clearly unhinged and there is so much offensive crap I can't even create a coherent rant. This is the first of thee posts. The images speak for themselves.
The user's trees are one of a kind so if you see something you think shouldn't be on Ancestry you should have no trouble finding the tree to report it.
Thanks to Becky for the link! 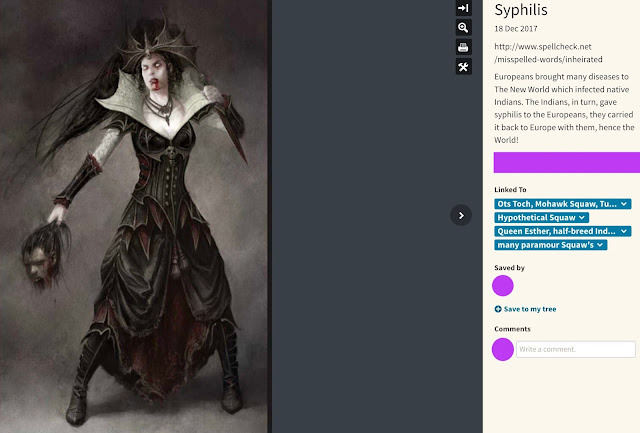 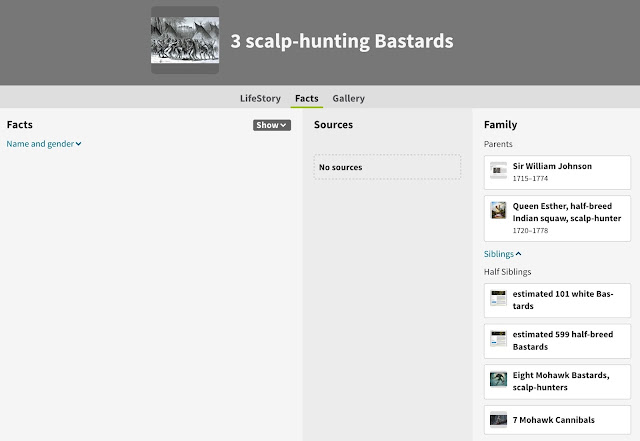 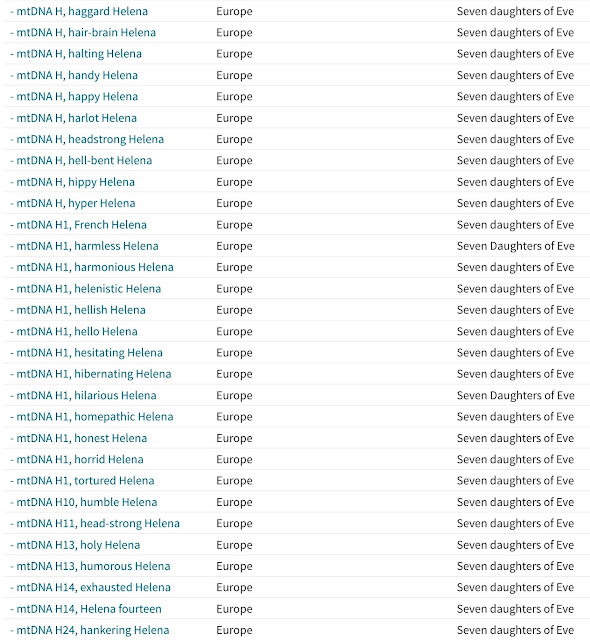 Years ago I started creating genealogy related playlists on YouTube.
I update them about twice a year.
There are so many free tutorials available.
Take advantage of them!
To go to the playlists click HERE. 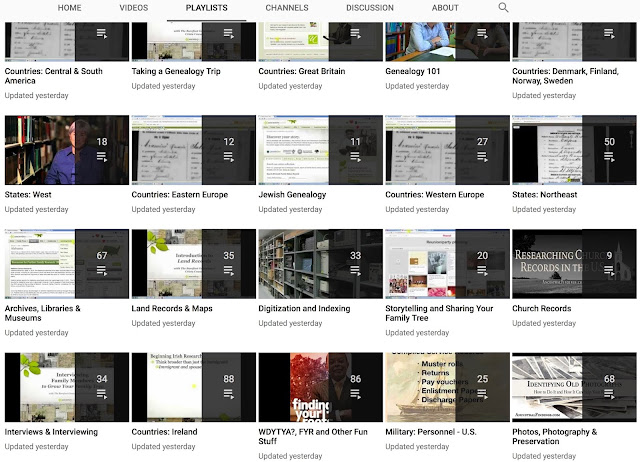 Barking has been "deemed offensive to [Ancestry.com's] brand" and is banned from their Facebook pages. In Ancestry's "Community" comments with links to Barking are censored.
Dear Emma, Hannah, Jemima, Mary Jane, and all of her other personalities agree that I use "the banner of 'education' to actually mock, deride and laugh at [Ancestry's] own customers" and I "can make [my] point concerning tree inaccuracies & cock-ups and their effect on our 'hints' system without being downright unpleasant and sarcastic about it."
Allen says, “your cute little blog is a waste of bandwidth at best”
Ann thinks I'm "...copying and pasting mistakes on trees and calling it a blog" and that my readers are "mean-spirited people...who like to have a laugh at the expense of others."
Sue was really offended by the “...continual stream of sarcasm and constant poking fun...What a nasty taste in my mouth your blog left me with. Unpleasant, sarcastic and jeering at people who you obviously see as your intellectual inferiors. Won't be reading that again.”
And finally from Les, "You truly are a horrible woman, pointing out mistakes is one thing but blatantly laughing and taking the p is completely out of order."

Researching our family histories we are bound to make mistakes. Hopefully we are quick to correct them. Unfortunately some people refuse to read or think before adding information to their family trees. Some trees have been abandoned so the errors are there for eternity. Here we will laugh, mock and shake our heads at the carelessness, stupidity and/or ignorance of those errors.
All examples are taken from trees published online.
I'll also post tips occasionally, though the messed up trees are a great example of what NOT to do.
If you have an online tree to suggest for a future post please send me a link: buwtree(at)gmail(dot)com

1. Copyright: Barking Up the Wrong Tree is licensed under a Creative Commons Attribution-Noncommercial-Share Alike 3.0 United States License and is owned and administered by Loretta Gillespie.

3. Credit: Credit is not given to tree owners to protect the clueless. A tree owner who discovers their tree on this site should correct their mistakes so no one else realizes they were once a clickophile.

4. Accuracy and Validity: While there are helpful pointers on Barking Up the Wrong Tree a majority of posts are intended to be humorous. The disastrous trees are copied exactly as they appear on Ancestry.com. These trees are being used to show others what NOT to do.

5. Images: Attempts are made to source images used despite the fact that the trees they are taken from do not include source information.

6. Comments: Barking Up the Wrong Tree will exercise its right to delete comments which are deemed to be spam, offensive, childish or just plain stupid.

Thanks to Thomas MacEntee for allowing the use of the GeneaBloggers terms as a template.

LLG70
I'm a freelance musician in a large Midwestern city. Genealogy is my addiction. I am not a professional genealogist and everything I write should be taken with a grain of salt (preferably with a shot of tequila).

You may also want to read...